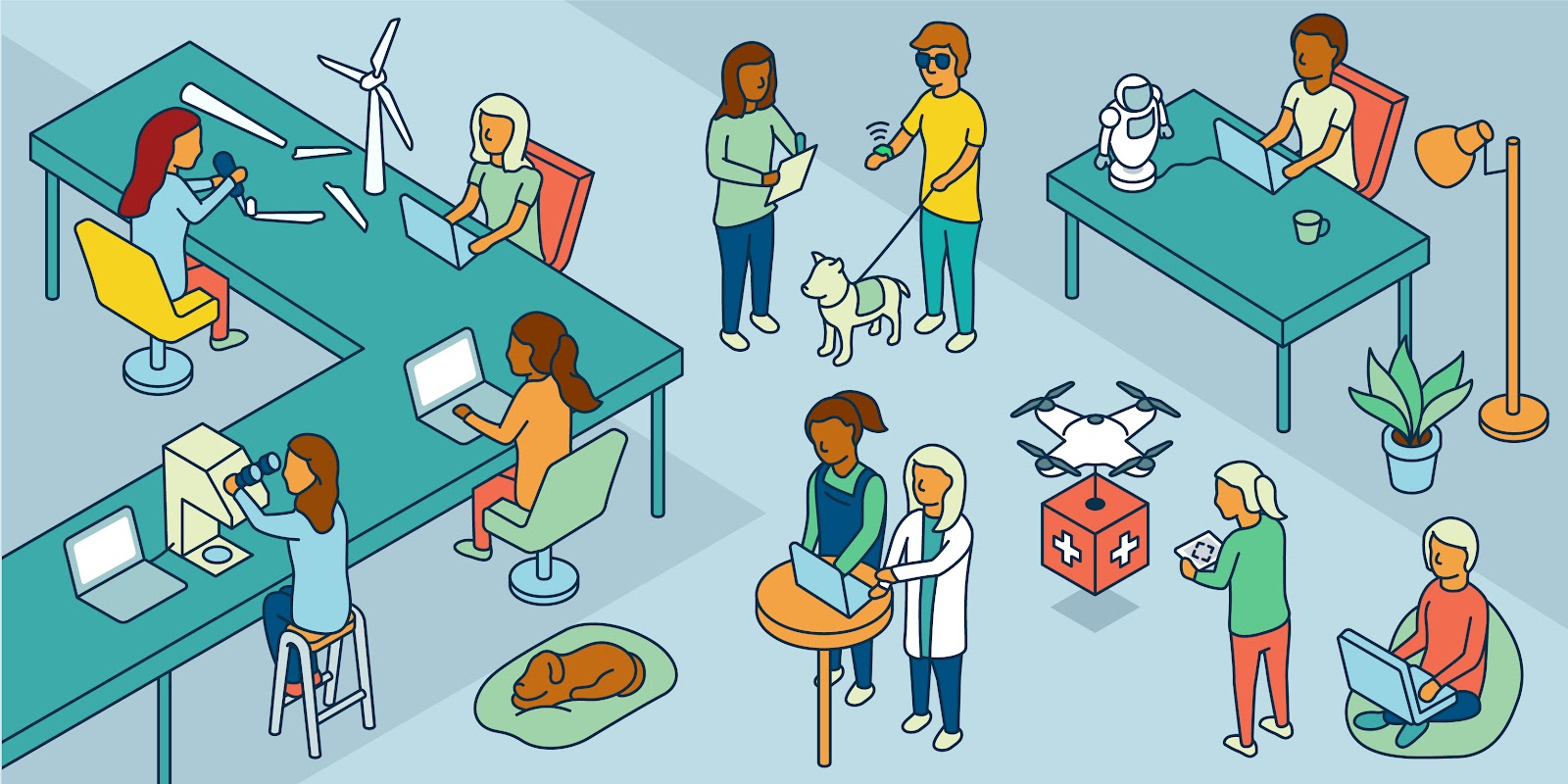 Since stumbling into the tech industry 10 years ago, there’s one thing I’ve become increasingly passionate about: we need more women.

Although the gender imbalance in STEM (Science, Technology, Engineering, and Mathematics) is a problem throughout the western world, the UK in particular is living with the uncomfortable legacy of policies that actively removed women from technical roles in the aftermath of WWII. These years should have been the golden age of British computing, however the industry crippled itself as the highly skilled women that had learnt to build, maintain, and run the colossus computers at Bletchley Park were barred from applying from many technical jobs, refused promotions, and forced to resign upon marriage.

These women should have become the role models that would have inspired and encouraged future generations of young women to join and contribute to the rapidly evolving industry, but instead a lack of workforce contributed to the demise of the British computing industry decades later.

But that was the past, and it doesn’t need to dictate the future.

The industry is starting to accept its diversity problem. In the last few years every major tech company has scrambled to arrange Diversity & Inclusion policies in a bid to keep up with the Joneses. However most of these policies are just focused on recruiting diverse talent, overlooking the issue that for every woman they recruit into a technical position that improves their own balance, the balance of the company they leave is likely to drop significantly. It’s not about moving women around the industry, it’s about getting more women in. Here’s some ideas of how we can do this…

It’s hard for a young girl to dream of becoming a software engineer when she grows up, if she doesn’t really know what a software engineer is, or does. We dream of becoming doctors, vets, detectives, and lawyers because we understand those jobs – we see people doing them in real life, or on TV. We do what we see. It’s unlikely that TV shows featuring aspirational groups of software engineers are going to become mainstream anytime soon (watching an engineer typing code isn’t quite as exciting as watching life or death open heart surgery), therefore we must take it upon ourselves to make these jobs visible, and then nudge people into them.

Throughout my school career I loved and excelled at Maths, however not a single person suggested to me that I should consider a career in technology. Like most teenagers, at 18 I was easily inspired, and it would only have taken a nudge with someone telling me: ‘You’re good at maths so if you study computer science, you could get a job making animated films’ I’m pretty sure I’d have gone for it. And it looks like my experience was not unique;  a recent study by PWC suggests that only 16% of young females have had a career in technology suggested to them, compared to 33% of males.

In the end it was only by sheer accident that I ended up taking a module in programming in my first year of university, and after completing the module at the top of the class, I swiftly changed courses from Film (I still have no idea why I chose this) to Media Technology. Thus began my entry into the industry.

Besides my low performance in my Film Studies modules compared to the programming one I took, the main factor that made me change courses was when I learnt how much more employable I’d be with a technology degree. A very pragmatic lecturer on my Film course stood before the class of 100 and said ‘only 5% of you are likely to make it in the Film industry’. I was out of there. As the employment market for graduates with arts and humanities degrees becomes increasingly competitive, the higher employability prospects of STEM degrees will become more attractive to the next generation, if only we tell them about it.

And there’s so much to tell. Besides the high employability rate, no other industry can compete with the freedom a career in technology allows, with flexible working hours and location becoming commonplace. The pay is great, especially when you compare the salary vs. hours worked to other industries, and the industry is developing so quickly that there’s always new things to learn. For anyone who wants to constantly challenge themselves and explore new possibilities, it’s a great place to be.

And there’s also a big opportunity in the tech industry to do a lot of good in the world, and help other people. The PWC study showed this was one of the key factors for many young girls when choosing a career, however most don’t consider a career in technology as an opportunity to help other people. We need to change the narrative, and start highlighting some of the good that the industry is doing.

For example, digital health technology is improving access to health care services to the world’s remotest and poorest communities. Voice technology is improving the quality of life and the employment opportunities for blind and visually impaired users. And as the cost of smartphones and data comes down, the technology industry has the potential to balance the playing fields and improve access to education across the world. These are projects that can inspire and engage young minds, and we need to push them to the forefront.

3. Keep the women we’ve got

Another thing to consider is that we need to work harder to keep the women that are already in the industry. The uncomfortable truth is that over half of female technology and engineering graduates have left the industry by the midpoint in their career. A recent survey by Capital One suggests that the most common reasons that these women leave can all be attributed to poor management. This is something that can easily be fixed. Unlike other industries, being taught how to manage people (not just projects and products) isn’t something that necessarily gets taught, but people are broadly expected to do it once they reach a senior level. For those that accept that it’s an area they want to improve, good management and leadership skills can be easily developed with respectful feedback, open communication, and where necessary, training.

I’ve always had a job since I started my first paper-round at the age of 13, and believe I’ve  worked for every different style of management there is. Besides a brilliant 18 months at what3words, my experience working part-time on the deli-counter at Waitrose whilst in Sixth Form has always stuck with me. I might not have enjoyed the job particularly, but the value that the company placed on their employees at every single level incited a level of loyalty that was quite remarkable. I’d question whether those working in the warehouses at Amazon, or those cleaning the desks at Facebook would feel a fraction of the loyalty to their employer as those stacking the shelves at Waitrose when I was there. If we want to keep women in the tech industry, we need to make them all feel valued, and nurture the sense of belonging to their teams and their companies that is required for careers with longevity.

There’s no two ways about it, we’re all guilty of bias. Whether it’s conscious or unconscious, our associations that men are good with technology and make strong leaders, and women are nurturing caregivers is not going to go away any time soon, no matter how much we want it to. But this does not need to be a barrier. As long as we’re conscious of it, question ourselves every time we have to make a decision about recruitment and promotion, and strive to be as fair as possible, we can overcome it.

The technology industry is complex and can be difficult to understand, and is therefore commonly mistrusted. We need to break down the barriers, stop making things sound more complicated than what they really are with all the acronyms and jargon, and start explaining things in a way that can engage and inspire young people from all demographics. Once we start attracting a few more women, trends will change and the rest will follow. As more engineers and developers become mothers and aunties, more young girls will be inspired to follow in their footsteps, and hopefully they’ll bring their friends along with them. The industry will not reach its full potential until it solves its diversity issue, and starts attracting the best minds across gender, class, and race. It’s in all of our best interests to do it.

If you would like to get involved in the campaign of attracting more women into the tech industry, I can highly recommend becoming a mentor. I’ve been working with The Intrapreneurs Club (a mentorship scheme to help improve diversity in tech) for almost a year, and they’re always looking for new mentors and sponsors to help grow their program. Code First Girls and Code Bar are also fantastic organisations that provide courses aimed at girls and minorities, and there’s almost certainly a group local to you that is crying out for volunteers to help with their courses. For more information on the history of women in technology in the UK, ‘Programmed Inequality’ by Mar Hicks is a superb read, and the full PWC Women in Tech report can be found here.

Any cookies that may not be particularly necessary for the website to function and is used specifically to collect user personal data via analytics, ads, other embedded contents are termed as non-necessary cookies. It is mandatory to procure user consent prior to running these cookies on your website.